Day 6-- Art and Cecil and Jean

Today was to be a free day in London, capped by dinner with Cecil Woolf (Leonard’s nephew) and his wife, Jean.

After a bit of a lie-in, three of the girls and I went down to the Tate Britain to see the exhibition,.Picasso and British Modernism  Which was pretty interesting.  There was a whole room of Duncan Grants, a good selection of Wydham Lewis, and the rest of the show provided a nice introduction to twentieth century British art.

The girls went on to tour the Globe, while I went over to Somerset House to visit the Courtauld and the wonderful collection of post-Impressionists: several Van Goghs, a couple of stupendous Gauguins, what seemed like dozens of Cezannes, 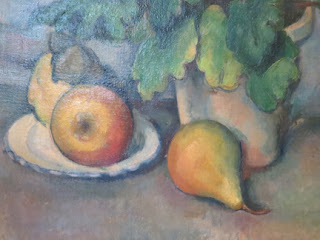 some Degas, a few gorgeous Manets and Renoirs… really the most concentrated selection of great art I’ve ever seen in one small space.  The German Expressionist room was full of old friends, and a new artist, Marianne Werefkin, who I’ve not heard of but whose one work looks a bit like Emily Carr.

There is also a British? artist Kees van Dongen, who I’d like to know more about.  Also saw several new Kandinsky’s.

Downstairs there was an exhibition of new rugs made from Omega Workshop designs by Vanessa Bell and Duncan Grant.  Great to see them made up in appropriate size and color. 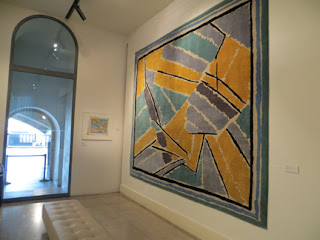 Went home and changed clothes and gathered girls together to take the tube north to Chalk Farm in Primrose Hill where we met Cecil and Jean at a very popular local Greek restaurant.  Dinner was a hilarious three and a half hour affair; I think the eight of us went through five bottles of wine.  We ordered the assorted menu, which meant course after course of appetizers. Then came plate after plate of meats.  And all through Jean and Cecil at opposite ends of the table were holding court. 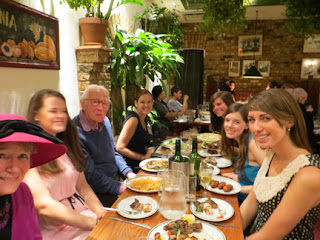 Long talk wi Jean about teaching in South Africa.  She had several very good suggestions for archives I can go to for historical pictures of places in London before WWII.  As the evening evolved, it became more and more apparent that a trip back at Xmas would enable me to do a bunch of helpful research for the book.  The girls want to come too, but I said, not as a course; don’t want to have to teach. 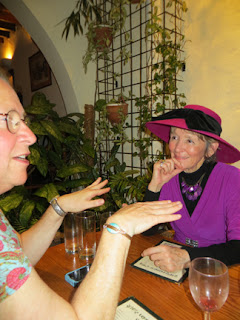 Cecil told lots of the usual stories about living with Leonard, but a few new ones about taking tea and milk into Virginia in her room and seeing the floor littered with pieces of paper with words written on them.  Girls pumped him about the publishing business and felt they learned a good deal about the trials of being a small print publisher in a digital world. 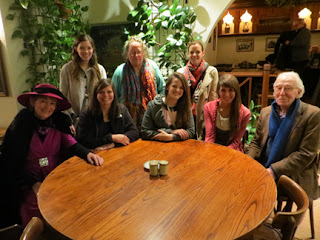 Hugs and hugs all around, and girls given official permission to call on them anytime they are in London.  Not sure their feet touched the ground on the way back to the tube—though they were certainly down to earth dealing with the late scatter of drunken students.
Posted by Elisa Kay Sparks at 2:35 PM