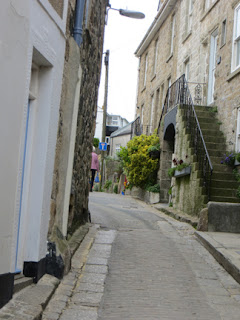 Despite some fairly intense development, the center of St. Ives remains much the same: a warren of small steep streets overlooking several white beaches.

·
.  Still an artist colony, St. Ives is dotted with small galleries selling prints, paintings, jewelry, glass products such as small stained glass sailboats and hand poured glass tiles, and all manner of touristsy gew-gaws.  We had so many encounters with so many dogs of every conceivable size and species that the girls finally declared themselves in “puppy overload.”  Apparently lots of holidayers bring their dogs to run on the beach.  At any rate we met a lovely Burmese Mt Dog—bigger I think than a Saint Bernard, ubiquitous terriers, a very polite pair of airdales, the biggest bassett hound I’ve ever seen—maybe it was another species…something breathtaking which I think was a Scottish deer hound, whippets galore.

St. Ives barely misses having a case of terminal cutes.  There are many small winding streets, leading up hills so steep that some streets are simply staircases. Mostly white-washed walls or grantite, often teal or royal blue trim, pots of flowers or succulents so large they look like they are from another planet (imagine hens and chickens more than a foot across).  There is a long street fronting the central beach called the wharf which curves around to become a long pier stretching out into the water with a lighthouse at the end.  The sand is pale, the color of light maple, and the water is completely transparent, changing colors constantly with the depth and shifting clouds. The general effect is pale yellow and
turquoise.