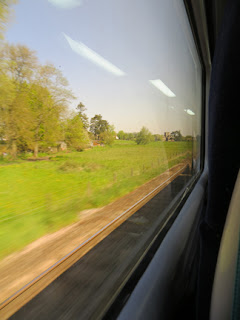 Lovely trip down, green fields  flashing by—some patch work of bright yellow rape seed. As we get closer to Cornwall, the white lace hedges and clumps of May (Hawthorn) begin to give way to stands of purple rhododendrons, scotch broom still bronze in bud, and the occasional palmetto.


Hit the estuary at Portsmouth—tide out, quite spectacular.

But nothing compared to arrival at St. Ives from St. Erth.  Sudden vista of endless white sands, turquoise blue waters, with Godrevy lighthouse out in the center.

Hired a cab at the train station to take me and all six bags (suddenly very huge and heavy) up the stair-step steep climb to the top of the hill where our B&B, The Hollies, on Talland Rd. turns out to be only three houses down from Talland House itself.  Checked in to general pleasure with small but tidy, pretty rooms and big view out sitting room window to the Lighthouse itself. Bev Trood, the owner, very sweet and chatty.

After brief reconnoiter to Talland House (now much hemmed in by new cottages built in the car park and general crowding all around), we went down down  down the steeple cobblestone lanes to the center of town (maybe 5 short blocks away—everything much smaller and closer than I’d remembered). Window-shopped our way down to the waterfront where we comparison-shopped for a pub with wide menus.  Stopped at The Lifeboat Inn where I had something called Rattlesnake Cornish Cider (quite a bite).  Spent another couple of hours wandering around the town harbor, wharf, and Smeaton’s Pier before climbing the stairs back up up up to the B&B.
Wednesday morning 5/23/12
Got up and went for lovely breakfast downstairs, including gluten free toast for me.  They switched Internet providers yesterday and girls are very happy with great connection.  They want to move in as Ian and Bev are quite lovely, and the place feels very homey.   I just booked 1:00 trip to the lighthouse, and now we are going back to Talland House.  After the lighthouse trip, we are going to the St. Ives Museum, but rest of day is open for wandering, absorbing atmosphere, taking pictures, and shopping.  I may try to squeeze in trip to Leech pottery.

Went up the street to take a closer look round Talland House.  I warned the girls we might not be able to see much of the garden b/c I didn’t want to be intrusive and bother the tenants.  But just as we arrived, a man in gardening gloves and a trowel walked out, introduced himself as the gardener, and invited us in.  Trip karma once again.  We’ve been so lucky and so blessed with generous people.  So in we went. 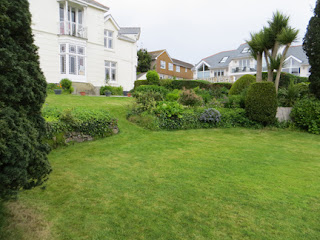 What is left of the garden is beautifully cared for: the top terrace, the oval below, the flat side garden with the trickling waterfall in the corner and the stream leading down along the side to the gate onto Albert Rd below. Things have been trimmed and planted and shaped, though one suspects this more tended appearance takes the garden even further from the original.

The escolonia hedge is still there, but interplanted with laurel and something else that I think may be honeysuckle.  The big stand of calla lilies by the corner fountain (heaven knows if they were there in Virginia’s day) has been replaced by clumps of psuedocoreus (yellow flags, quite a favorite of Leonard’s).   The large urns have disappeared from the piers by the windows on the lower floors, which judging from furniture placement, no longer function as doors into the garden.  The bright-eyed purple African daises no longer grace the top of the oval, though we ran across quite a stand of them a little down the road, and although there are no red-hot pokers, there is a large pampas grass down by the gate The gate itself has been wired shut and is increasingly fully covered by a hedge, though Woolfies wanting to recreate the 1906 visit of the Stephen children can still climb the stairs and try to peek through.

The real changes, however, have to do with the crushing amount of development crowding round the house.  Only a small stretch of the garden walls that supported the green houses is left.  The whole of the old car park (what used to be the orchard) is completely taken up by very modern, white and glass- brick holiday houses.  The whole bottom half of the garden has disappeared, sacrificed for a new wall and access road up to the holiday houses.  Below the road, an area which used to be a continuation of the garden, where only half a dozen years ago I took a photo of two stands of red-hot pokers framing the view to the lighthouse, has become a construction pit. Real estate prices are apparently booming in St. Ives, and every square inch has become potential investment property.  So not only the garden, but also the view, and more subtley the whole feeling of graciousness which used to characterize Talland House has been severely curtailed.